create  a vibration with enthusiasm

The ideas that crowd the mind

at times clog  and clot.

The one interrupts the other

the lesser one overtakes the greater

the trivia  usurps the importance

the grave slips back

the teeming of thoughts

need a stop and a break

time to mature and get through

till then there should be a pause

an over-enthusiasm could spoil

destroy and mangle the growth

turn and twist the flourish

a caution should lie there

On a voyage I go

seeing places be the goal

the cities  of fame take

the priority all the more.

Go I with expectations high

New York, a place of pride

I chose the place in the stride

away I went  with an enthusiasm

Did it stand up to my fascination?

Be that a question hard

proper  response on the trial

it was and was not in a way

the charm not so exciting

as the city looks tired and forlorn.

Overused is the epithet that strikes me

overexposed in a fashion that  gathers

the city looks aghast in a sequence

of being  in the limelight for long

a hype built by men around. 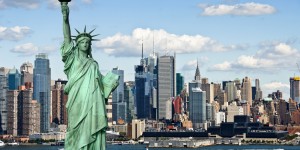 The most happening place they say

the economy or the political  rendezvous

it remains the same as past

though with less gleam and  noise

succumbs the land to pressure.

The suffix “new” that adorns it

be unclad with a due reverence

to befit the place with a succour

lest it would be a misnomer

such be the status of the metropolis.

Abounds it with  attractions various

one of the Statue of Liberty on an island

the Empire State Building  high up

with the U.N on an overlook

the city  needs a rest from now.

This is the level of the great city

very much different from yesterday

the Chinese entry is impressive

a distinct society  is on the rise.

A style of the colonies thirteen

original in the eighteenth century

now attains a dim with a detain

as the eastern hub of the world

rises from oblivion with a composure.

Big apple, as it is fondly called

remains big in a sense apart

a shy residue of the past it is

just a shade of past glory

Enthusiasm is a spirit
it is also a drab
a desire to accomplish
a feverish one might be
spurs up at the moment
drives one to go ahead
grab the opportunity
and end up with a win.

The same feel is different
with people who leave it
allow it to settle down
there be no spirit whatsoever
a calm and relaxed approach
not moved by any tide
Well, there are two side
one be alert, the other be silent.

oolness is a virtue
without a doubt
but too much of it
turns out to be negative .

The vibration is an articulation
that calls for an action
The efforts you put go well
are in proportion to the achievement.
Drag and withhold are two weakness
that are found in cowards
the propitious trend in a way
is to seize the chance of the day.

The little girl  is a catchy one

with beautiful eyes and lovely nose

eyes sparkling all the more with a glow

while  the lovely nose gives her a profile

so elegant and regal   with a dignity on the way.

Must be enchanting to see her

but she remains exclusive all the more  so

bubbling with an overwhelming enthusiasm

circling round her family and  close friends.

Being kept so by her mother in total exclusiveness

fearing any evil eye would bring harm to her daughter

the little girl surpasses anybody’s   idea all the more

excelling in attitude  and movement  with a grace

that  places her in a pedestal of grandeur.

If the little one appears in public

she is sure to raise the bar

as all eyes that fall on her all the more

would find themselves hard to transfer their sight

and see some one or other mundane and ordinary.

This post is a part of Write Over the Weekend, an initiative for Indian Bloggers by BlogAdda.

The thought of children

bring to mind their innocence

the love they show  in expression

taking  us to a  delightful relevance

when we turn  young  and youthful

going  back to the days of childhood

where everything was wonderful

reminding us of the days  that could

spice and spruce the remaining days

adding charm and thrill to a degree

refreshing  the mind in  a large way

diffusing the cobwebs in a spree

exalting the spirit  with a sustained stay. 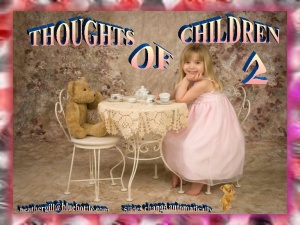 The parental enthusiasm has no limit

inducing the child to get beyond the summit

putting him to an unwanted  strain

leaving him in a most difficult pain.

Acceding to their compulsion

unable to vent out his repulsion

he moves about in a dilemma

having to put up with a trauma .

His childhood is dreadful

not able to take decision rightful

depending on his parent’s wish

his days go off in a fizz.

the  less cordial bring about a char

while most children climb over

the rest are pushed down ever.

Giving a liberty to  a level right

allowing them to grow up  straight

with an eye of distant care

would  generate a success 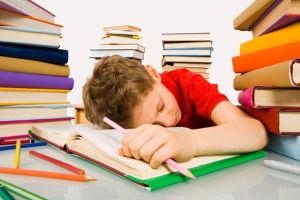 The enthusiasm gets constrained

when the expense comes into force.

The  restriction sends a fear

which signals a withdrawal.

but the initial grace disappears.

with a check on the expenditure,

The excess spending would lands in debt

while the less expenditure would bring no  result

leaving  the thing unfinished  and incomplete

implying a moderation in the go.

Many a spirited project  do not take off

as the financials pose a threat.

The thought of money shatters the imagination

as the flow gets behind  with a pull back

slowly fades away into  the oblivion

gaining a stature of non exis

The creative mind is never at rest

always sets the ball in motion

but really ideas get growing

with the mind almost all time pondering

either it be in writing or painting

be them in wood ,clay, stone

along with match sticks and iron

left alone the music and dance

which crown the artistic creativity

with great shine and illumination

and crosses the pinnacle

with a voluminous fame and reputation

that  deliver a high sophistication

and renders a charming ebullience.

Being a pure vegetarian from birth
used up to home-made food for long
travelling did not bring much mirth,
Nothing much to eat all the way
and nothing like to eat in the cafe
I sit in a corner with an empty tray
during dining time very safe
with a fruit juice iced
seeing others enjoy the dinner
and eat all else not even fried
from egg to chicken not thinner
lambs to cows all grilled
pork to fish very much smelly

all without any discount
make me feverish and disorient
so as days into traveling in the count
get tired and exhausted with disjoint
wishing to get back home at the best
as every time I decide in a hush
not to undertake excursions and take rest
but all times I break my vow in a crush
as the enthusiasm to see places
overwhelms and conquers in a rush
my otherwise low ebbing spirit in a chase.